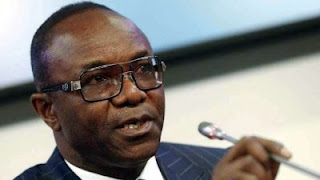 The federal government has insisted on increment of fuel pump price from N145 to N185 per litre, saying that given the landing cost of N171 per litre for the product, the government regulated pump price of N145 is no longer sustainable.
However, the National Assembly Joint Committee on Petroleum (Upstream and Downstream) and Gas yesterday kept mum over the proposed increase, as well as the continued payment of subsidy by the NNPC, contrary to the bragging earlier by Senate to query the agency over who approved the subsidy it had paid on PMS.
The Minister of Petroleum Resources, Ibe Kachikwu, said this when he led other key players in the oil industry to a public hearing on the fuel crisis during the Christmas and new year, which has continued to linger.
Speaking at the hearing, the Minister who corroborated the revelation by the Nigeria National Petroleum Corporation (NNPC) that about four thousand five hundred trucks loaded with Premium Motor Spirit (PMS) were diverted during the Christmas period resulting in the acute scarcity witnessed at the festive season, proposed three measures to resolve the perennial fuel crisis.
Kachikwu said the fuel crisis in the country will continue unless the government implements a three pronged model of pricing efficiency, enforcement and infrastructure or logistics in the downstream sector. While explaining that the landing cost of N151 per litter has other specific charges, including charges by government agencies, such as NIMASA, NPA, among others, amounting to N19.
He blamed factors like, logistics, hoarding and diversion, price disparity issue for the crisis, adding that the ministry has created an eighteen month emergency window to permanently resolve this issue.
He said the exchange rate was N285 naira the time the price was fixed at N145 but now the rate is N305, insisting that the tankers must install trackers in their trucks to ensure that diversion is curtailed.
He said the refineries in Nigeria are needed to be up and running to resolve the issue, calling for tax holiday and incentives to importers and oil marketers, pointing out that Nigeria has the technical capacity to build its own refineries.
In his submissions, the Group Managing Director of NNPC, Maikanti Baru, said it directed 24hrs supply to depots to ensure availability during the crisis, adding that there was increased surveillance and monitoring to prevent diversion.
According to him, five illegal stations were apprehended and sealed during the crisis, where the product was disposed freely to the public and sold at controlled price of N145. Baru added that to address the scarcity, the Kaduna and Port Harcourt refineries contributed 3million litters daily respectively.
To this end, the corporation got to 1.9million, hence they supplied to Niger and Gusau. He said also that IPMAN confided in them that when they go to DAPMAN to buy the product, they charge them an additional N2.8 naira extra, but no evidence was given because they would have withdrawn their licenses and deny they supply.
The Director General of the Department of Petroleum Resources (DPR) Dantani Baba Ladan, revealed to the National Assembly joint committee, that most of the fuelling stations in the country were found wanting in hoarding and diversion during the scarcity.
He said some of the fuelling stations personnel who were involved in storing of the petroleum product and have been arrested.
While calling on the general public to contact the agency with any useful information on anyone hoarding fuel, he disclosed that the agency has charged Independent Marketers to comply with Government pump price of N145 per litre.
“For now NNPC is the sole distributor, individual marketers can come and help and one marketer has been charged 127 million for going against the roles”, he said.
On his part, the Executive Secretary of Major Oil Marketers Association of Nigerian, (MOMAN), Thomas Obafemi Olauwri, advocated that, the major players in the oil business should be given major role to pay in the importation.
According to him, the end result towards getting a successful resolution to petroleum scarcity should be deregulation. “We don’t have any intentions of fuel increase, but there are so many things threatening the N145 per litres”
He urged the Upper Chamber to charged States Government to stop adding more charges to product crossing through their state, adding that, the charges should be harmonized in the Landing cost.
Also, Chairman of Board of Trustee of Independent Petroleum Marketers Association of Nigeria (IPMAN) Aminu Abdulkadir urged NNPC closed down all fuelling stations without approval from the organization.
He expressed concern for non accessible of the petroleum products for the marketers. “Our concerns are non access of the products but we sell at government pump price. We need support from NNPC because we have power to sell the product at the local level.”
The DAPMAN said they are not importing the product because the landing cost was high and they complained that they have outstanding subsidy debt by the government of N800 billion, adding that they equally face challenges securing FOREX for the import of PMS.
NARTO President lamented that the DPR has concentrated its activities at the fuel stations alone and locking it, saying they should go down to the tank owners whom he accused of hoarding and diversion.
“If the stations do not buy from NNPC hence they sell beyond the pump price, DPR should trace it to where they got it from the tank farm owners. The security agencies who stopped rice import through land borders should also stop that of fuel. The committee should look at the import charges being charged on importation of trucks”, he said.
By: Ikechukwu Okaforadi, Christiana Ekpa, Umar Mohammed Puma,
Source: peoplesdailyng.com
Tags: National Dailies