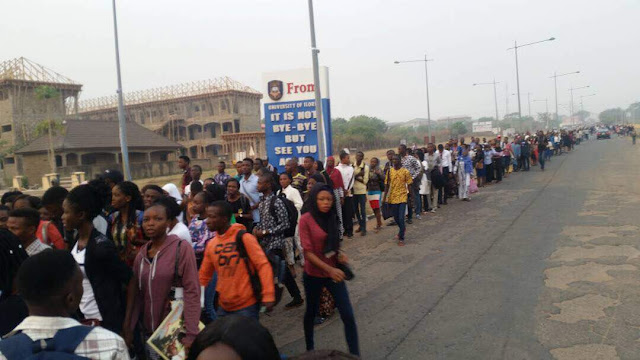 Great Trek of Unilorin students to school gate. Photo credit: unknown.
There seems to be no positive sign indicating an imminent end to the crisis of  fuel scarcity in Ilorin, the Kwara state capital. Prices of goods and services have increased significantly, thereby paving the way for all manner of exploitative activities to thrive in the state.
At the heart of the harsh economic situation lies the students who are largely at the receiving end of the ongoing hardship experienced while commuting the capital city. Worthy of mention are students of the University of Ilorin who have been frustrated and traumatized by the unpleasant situation.
Recently, it was widely reported by the media that the fuel scarcity crisis which started before the Christmas festivity, has improved tremendously in most states in Nigeria. In fact, the Honourable Minister of State for Petroleum Resources, Ibe Kachikwu, was quoted to have said that the pump price of PMS remains at the regulated price of #145. However, it is quite irreconcilable, to say the least, in stating the obvious fact that the situation is yet to improve in Ilorin.
Yesterday, 8th January, recorded a rare occurrence in the lives of students of the ‘Better by Far’ university. Majority of them had to trek several kilometres in order to subscribe to the usual options of getting to school – a free ride or accessing the price regulated shuttles. This was due largely to the hiked prices in transport fare and insufficient commercial vehicles.
Giving the circumstances, the usual thing for an average UNILORIN student to do, is to get to a place called Okeodo or better still, get down to the school gate so as to catch a cab to school in good time. Alas, reverse was the case. Having trekked several kilometres that lasted over 30 minutes, it all amounted to jumping from frying pan to fire. A bad call was made. The population of students at the school main gate was massive; it was like a lake with an outlet receiving water from Okeodo in form of human beings. Adding more insult to injury, students were made to pay either twice or thrice the usual amount payable as transport fare to the school main premises. 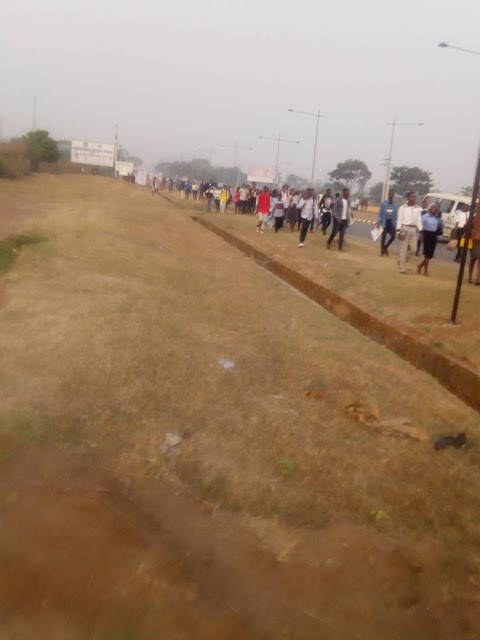 The Great Trek continues…Photo credit: unknown.
Momodu Lucy Abiodun, a 300 level student of Educational Technology (UNILORIN) narrates her ordeal during the great trek. She says: “I had to trek from Sanrab to school gate, upon getting there, I took taxi for #100 (as against #50). Actually left home as early as 6:45am, got to Sanrab junction and met a small crowd. I waited for like 2mins, then decided to trek to anywhere I see korope (a local name for a mini bus in Ilorin) turning. To my surprise, no korope on the other side was turning or passing by, except few that were going to terminus. Getting to Okeodo, they (students) were massive there too. So, I continued to the school gate. Met queue in which the policeman there was controlling it, you would get there and join the queue.
“Everything was in order, until those that were just coming saw a missionary vehicle who also turned to also take students into the school. That was how the line was disorganized. The policeman had to leave us since it was already  rough. That’s was how students started trooping into the school compound up to staff quarters junction. Korope, cab, Maigida (a transport company in Ilorin) was seen stopping there to take students. Just few got to the school gate to turn. There at the school gate, I struggled for korope in which I fell on my back when trying to enter. Had wound on my hand and leg. But I eventually got a taxi for #100,” she lamented. 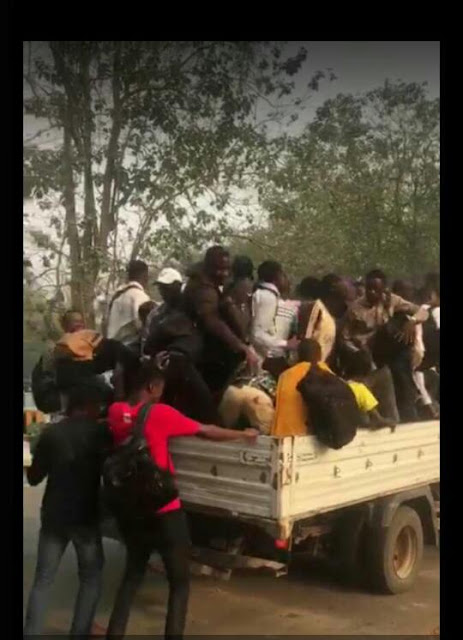 Unilorin students loading themselves on a truck heading to school. Photo credit: unknown.
Shonaya Adewale Tosin, a 500 level student of Law (UNILORIN) has this to say: “I was at Okeodo junction at 7:50am…immediately I saw the vast number of students waiting for bus, I started trekking towards the school gate, let’s say around 8:30am or thereabout, I saw a cab. It was really bad. So many students were waiting for cabs. It was so bad that some students had to trek into the school.
“People from all over Tanke came to Okeodo, hoping they would get cabs….it was crazy. Was even lucky to get cab withing that time frame. Some other students spent longer times before getting cabs. And that’s even if they got cabs,” he concludes. 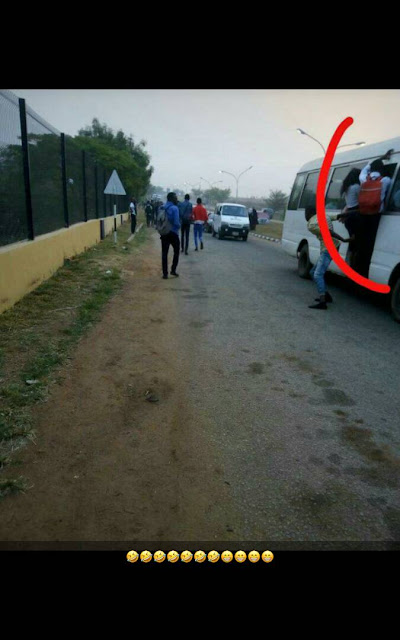 A female Unilorin student seen slugging it out with her male counterpart. Photo credit: Unknown.
Dada Emmanuel Oluwadunsin, 400 level of Educational management (UNILORIN), narrates his experience: “The experience was a very bad one at it.  Paid #100 when going, #200 coming back. Had to trek from my hostel at Sanrab to school gate. Getting to the school gate, I still ended up paying #100 from the school gate to my faculty, of which #50 is the normal amount they were to collect. It was a great extortion at it. Now I’m thinking of how I’ll get to school tomorrow again,” he disclosed.
Akinyemi Muhammed Adedeji, a 400 level student of Law (UNlLORIN) gives a concise account of his own experience: “I trekked to school gate. And I paid #100. Getting a cab was like getting a well in the Sahara. Everyone did pay the same amount. Ugly is only the beginning of the definition of what this is.”
Garba Hassan Usman, a fresh student of Combined Law (UNILORIN), who didn’t participate in the long trek, adds his voice to the issue: “Not really…partially, because I didn’t trek. I only stood for a long time before getting a cab from my area to school.”
On the experience he had, he says, “Exhausting sir, time and money consuming. I hope it doesn’t continue this way, because I’m really scared of going to school tomorrow. I paid #150 sir, instead of 100 naira from government house area to PS.”
On the other side, the experience encountered on the way back home was far more worse than the morning episode. While some paid almost the exact price or slightly higher than they did in the morning, others paid twice or thrice as much.
Worse still, the long queue and waiting at the school park didn’t help matters. Some students had to wait for over 3 hours before finally getting a cab back home. Kemi Adeyeye, a fresh student of UNILORIN, was made to go through this trial by fire. She was said to have arrived at the school park at 4:31pm and after a long wait, managed to leave school at 8:45pm.
She has this to say: “I feel like crying. I don’t even understand the queue, it’s from different angles. No bus. Everywhere is rowdy. Even the vehicle that are coming are charging times 3 of the normal price. And the way people are rushing the buses…They don’t even care if they get crushed by the tire of the car. What everyone is after is just to get home.” 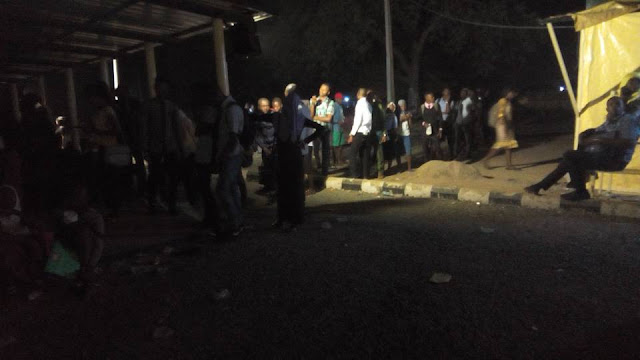 Unilorin students anxiously waiting to catch a bus back home. Photo credit: Kemi Adeyeye.
For Lucy, it was not just about the hell she went through going back home, her laptop also had its own fair share of the heat of the moment. She says, “It was when I got home I saw that the laptop I was carrying in my backpack has been affected due to struggling for vehicle. The edge of the laptop probably hit something. People were struggling to at least get a vehicle out of the school. Both those going to Tanke and those going to challenge board the vehicle. The damage is not really much, it’s still working. Just a part at the edge broke off.” 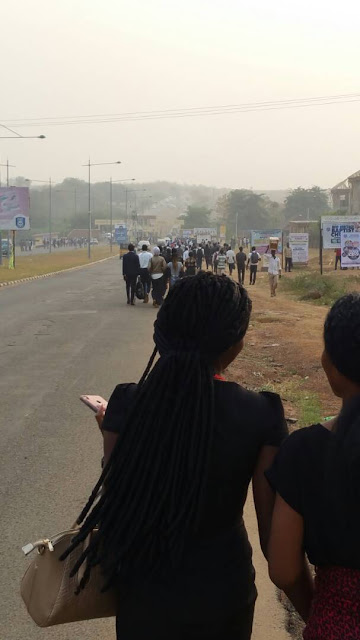