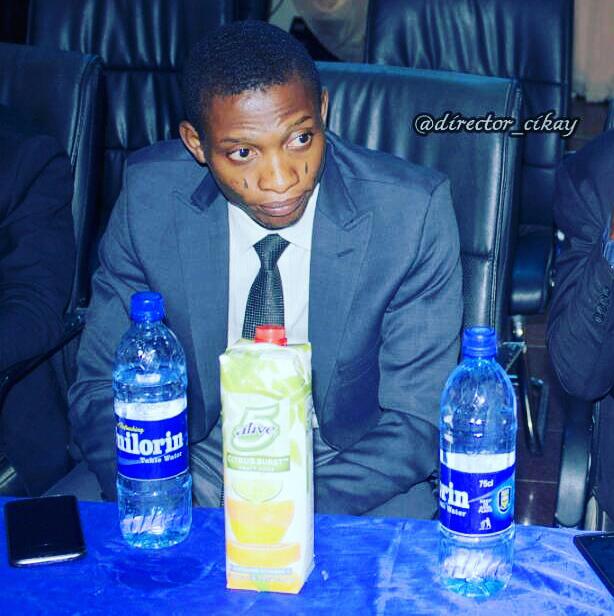 Hezkay; immediate past Unilorin SU Welfare Secretary, College of Health Sciences (COHS).
December 29, 2017.
In a bid to add his voice to the current wave of heavy allegation leveled against the immediate past President of Unilorin Student Union, Mr. Aremu Sikirula Ademola (Hezkay), a former Welfare Secretary (COHS) during the Eminent administration, opens up on what he knows about the souvenir scandal, among other allegations leveled against Eminent.
————————————————————
UCJ: Can we meet you?
Hezkay: My name is AREMU, Sikirula Ademola.
UCJ: I believe you’re in the know of the issue making the round now. What’s your take on the missing souvenir?
Hezkay: Definitely. Well, it’s a lot of stories. With several sides.
UCJ: First, did Halogen confirm he had taken stock of delivery in one of your previous executive meetings?
Hezkay: That he surely did.
UCJ: What’s your take on his allegation against Eminent? The souvenir, starter pack, and muffler projects respectively.
Hezkay: He spoke to us all at a meeting. We were trying to decide on how much to pay the guy then. Well, on starter pack, I don’t understand why and how that’s becoming an issue. We all have(sic) an executive meeting when the contractor brought the consignment. And we all agreed unanimously on the consignment.
We had our reservations at first but the contactor convinced and clear some grey areas.
On Muffler;
I didn’t really follow the whole thing much. I was writing my PART ONE FINALS EXAMS THEN. But what I know is that; the Union didn’t give Eminent any money for the contract. So, I felt it’s a personal project and not a Union project. This is purely my own understanding. I know Ishowo and OBV had the contracts too during their tenure and it didn’t cause any rancour.
So, I didn’t see any reason why this should be an issue. That’s why I never cared to know about the muffler matter. Just for clarity sake.
On Sourveneirs:
The completeness of the first batch of sourveneirs supplied was confirmed to all CEC members by Halogen. He was the one around when they supplied. I should have been there too but I wasn’t around as the time of supply. He confirmed it was complete and even complained about a few that had some minor issues.
UCJ: What were the reservations, if I may ask?
Hezkay: The contractor said the EXCOS pictures weren’t clear on the flash drives, we complained bitterly but had to let go unanimously. He confirmed it too before the guy was paid his balance.
UCJ: Halogen dissents, that it was Eminent who instructed you all to let go, your take please?
Hezkay: That’s funny. Eminent was never an authoritarian. We all decided to let go out of consideration.
UCJ: Halogen also claims he was instructed not to count the souvenirs upon delivery. To what extent is this true?
Hezkay: This can’t be true. He confirmed to us then at a meeting. How come he’s saying this now and not then?
UCJ: How would you substantiate your claim that Eminent isn’t authoritarian?
Hezkay: He’s definitely not an authoritarian. As the president, you get to make decisions but he never made any decision without our go ahead or at least knowledge about it. We all consult before we do anything.
UCJ: Why then would Halogen make such a damning allegation against him if he led with that style of leadership?
Hezkay: Well, that’s not clear. I don’t know. But I believe there’s more to it that meet the eyes.
UCJ: What do you think is fishy?
Hezkay: That’s the mystery. I don’t know.
UCJ: Now, as the former Welfare Secretary, why didn’t you endeavour to count the souvenirs after the last batch was delivered?
Hezkay: It was delivered so late into our administration. And I was writing Pathology exams then. And I believed Halogen would do justice to the counting before taking them to store.
UCJ: Could this be a strong reason for not counting them, sir?
Hezkay: No! If Halogen had told me he couldn’t handle it alone. I’d have found the time to join him and do the counting. He never said he couldn’t handle it. I’d have done the same for him. When starter packs came in, I spent 3 days and night at PS counting them. So, it was never an oversight, I was just so busy with exams.
UCJ: Did you confirm from Halogen personally if he actually took stock of the consignment (souvenir)?
Hezkay: No! He told us all at a CEC meeting which is the normal avenue for official information.
UCJ: Thanks a million, sir.
Hezkay: You’re welcome, chief.
OSUJI, Chima Francis
UCJ, UNILORIN.
Tags: UCJ Interview