GEMS School of Media and Communications, Ilorin has held a two-day capacity building session on TV presentation, Journalism, writing, and media work on the 21st and 22nd of June 2018 at their school located at Pipeline Road, Ilorin, Kwara state.

Outstanding Journalists and Veterans who have had a vast experience in the field were invited from far and near to expose aspiring and practicing Journalists to the rudiments, prospects, and demands of the profession.
Among them is the popular Abdul-Razaq Akanbi, the Director of broadcasts, Nigerian Television Authority (NTA) who has had a vast experience in TV presentation and journalism. He exposed the audience to the rudiments of broadcasting and TV presentation as well as the qualities of successful broadcasters and techniques used by same. Citing instances, he stressed the need for good linguistic and communication skills not only in English but in local languages as well.

He reinforced the fact that broadcasting is a sensitive profession that must not be handled frivolously. According to him, broadcasters are not only trained to disseminate information but to manage same and ensure that pandemonium does not arise in the society by owing to their manner of information dispersal. To him, such is a responsibility and does not imply being biased or sentimental.
Mr. Muyiwa Lukas is another renowned figure who passionately graced the occasion. He introduced the audience to the rudiments of Hard, Soft and investigative news and exposed the same to the important and sensitive factors that must be put into cognizance if a quality news piece is to be arrived at.

He stressed the need for factuality and authenticity while pointing out the need for the use of documents in case of an investigative news and journalism. However, he warned that making attribution to sources used is a paramount issue that must not be forgotten.
The second day of the intensive training session was equally a quite memorable one which was graced by two veteran journalists and media practitioners. Mr. Olusegun A. Mokuolu, information officer of Directorate of Cooperate Affairs, VC’s office, University of Ilorin and a member of the young African Leaders Initiative, Bureau of International Information Programs, US Department of State drilled the audience on the nature of the Nigerian media landscape, its problems, successes, and prospects.

He pointed out that the Nigerian media landscape is private sector-driven, yet financially held to ransom by the government due to its being an all commerce affair. He noted that poor funding and patronage is a serious issue that plagues many media houses in Nigeria but also added that despite the many problems of the Nigerian media, it has equally had its successes which owes largely to what he described as the “Nigerian Spirit” which has allowed it to thrive even in the face of dire difficulties.

He attested to the rapidly changing nature Journalism as a profession today and pointed out that same is speedily advancing towards digitalization and this would come with its many demands both on the part of media houses and other stakeholders in the profession at large. He however noted that such would increase the speed at which news travels. He urged journalists to learn from the banking industry while awaiting digitalization to fully ensue and emphasized the need for the acquisition of adequate ICT skills.

Mr. Gbenga Osinaike of ChurchtimesNigeria.net , an ardent writer and a veteran Journalist took the audience through the rudiments of professional writing and news presentation.

According to him, writing is not a tea party but a serious business, an activity for which one must get ones acts together before embarking on. This according to him is because a written piece never dies and can be used as a testimony for or against the writer. He stressed the fact that writers are good readers and added that one must not engage in writing if one doesn’t love reading because one’s product in writing is essentially a function of what one has read.

He explained that writing is not just a matter of intellect but also experience which gives life to any piece. He however stressed the need for factuality and empiricalness adding that an “experiencial” and empirical writing comes from the heart while an intellectual one is from the brain.
At the end of the session, the administration of the GEMS School of Media and Communication expressed profound gratitude to attendees of the training session for honouring their invitation and added that they look forward to more encounters with them. The president of the Union of Campus Journalist, University of Ilorin Chapter, Mr. Chima Osuji, on behalf of all those present reciprocated the gratitude and expressed his sincere appreciation to the school for honouring the audience and affording them such first-hand opportunity to tap from the superfluity of knowledge and wealth of experience of professional veteran of this caliber. 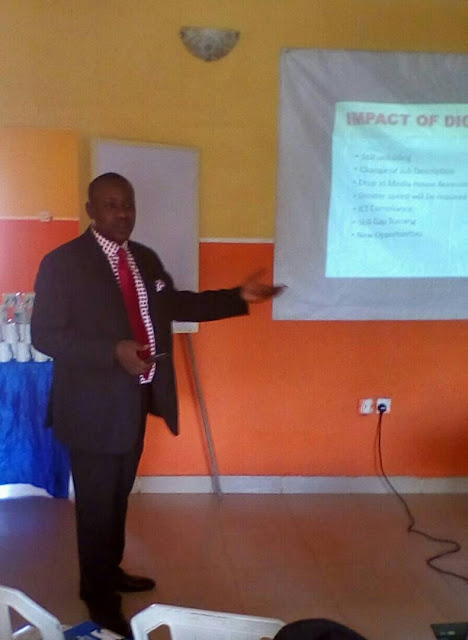