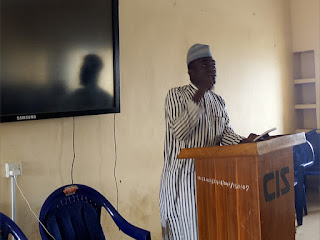 The CEO Image Merchant Promotion, Mr. Yushau Gidado, has clamoured for progressive and humane journalism in the Nigeria.

He said this in an interactive session, which held recently in the department of Mass Communication, University of Ilorin.

According to the Public Relations expert, Mr. Yushau Gidado, the objectives of journalism are to entertain, inform, educate, constructively criticise and mobilize. He further listed the basic principles of journalism as truthfulness, independence,  being  fair and objective and  having a humane nature.

Yushau reported that, the recent success recorded by the military in the war against Book Haram is due to the change in style and attitude of media outlets across the country.

However, he mentioned the fact that the internet is one of  the most reliable sources of information nowadays. According to him, a considerable amount of people go online to seek information. “The power is in the social media,” he said.

He educated the students on the intricacies, functions, job opportunities offered and the qualities a PR Practitioner must possess, while he explained that, money shouldn’t be the drive, passion should be, emphasizing the importance of persistence and passion.

More so, he presented a copy of his book “An encounter with the spymaster ” each to the head of department and  Association  of Mass Communication Students (AMCOS).