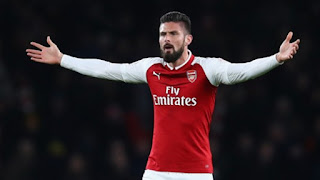 Sam Allardyce has claimed that Olivier Giroud’s wife is standing in the way of a potential move to Everton in January.

The Toffees’ lack of firepower was made evident again on Tuesday as they spluttered to a 0-0 draw against West Bromwich Albion.

Aside from Wayne Rooney the club have struggled in front of goal, making a new striker a must for the coming transfer window.

Giroud, however, might be barred from swapping Arsenal for Goodison Park if Allardyce’s analysis of the situation is accurate.

“I wouldn’t have thought [Giroud would move] as he refused to come last time,” he said, referring to Everton’s ultimately unsuccessful courtship of the France international in the summer.