Georgina Rodriguez has posted the first complete photo of the Ronaldo family, featuring Real Madrid superstar Cristiano Ronaldo and their four children.
In November, Georgina gave birth to daughter Alana Martina, who joined Cristiano Jr and twins Mateo and Eva Maria. The twins were born in June to a surrogate mother, while the 32-year-old has also never revealed the name of Cristiano Jr’s mother.
A photo of the entire family had never been shared publicly before, but Georgina has now posted a photo on her Instagram with both parents and all the children in their home.
The image is accompanied by the caption “Create love with you and build a life with you.” 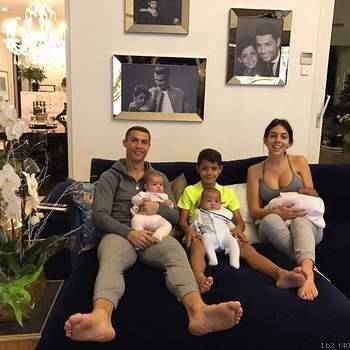