Cigar once smoked by former British Prime Minister Winston Churchill has sold for $12,000 (£9,000), according to the Boston-based RR Auction house.
Churchill partially smoked the 4in (10cm) cigar at the Le Bourget Airport in Paris on 11 May 1947.
Cpl William Alan Turner saved the Cuban cigar, which features a red-and-gold La Corona label alongside the wartime leader’s full name.
It also featured a photo taken by the Air Quartermaster with an annotation written in pencil that read: “A photograph I took from the doorway of York MW101 at Le Bourget airport, Paris, on 11th May 1947 just before we flew black to Northolt”.
Bobby Livingston, executive vice president at RR Auction, called the item “a synonymous piece from Churchill’s trademark look”.
UCJ, UNILORIN. 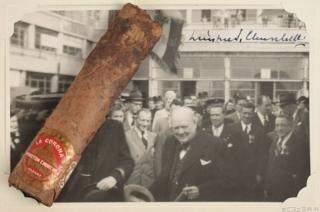