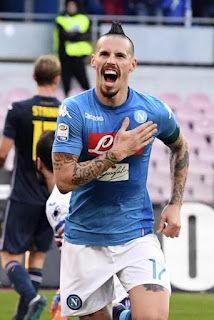 Midfielder Hamsik, who drew level with Maradona last weekend, took the record outright by scoring what proved to be the winner in the 39th minute of Napoli’s 3-2 victory over Sampdoria.

Hamsik was presented with a pair of special shinpads after the match, emblazoned with a picture of himself, the number “116” and “Forza Napoli” (“come on Napoli”) over a background of Napoli fans holding aloft team scarves.