Larry Flynt’s ad in the Sunday edition of The Washington Post is hard to miss.
For one, it takes up a full page. And there are no pictures — just bold, all-caps text dominating the top third of the page:
“$10 MILLION FOR INFORMATION LEADING TO THE IMPEACHMENT AND REMOVAL FROM OFFICE OF DONALD J. TRUMP.”
Flynt, best known as the publisher of the pornographic magazine Hustler, outlined numerous reasons he felt President Trump needed to be removed from office, charging him with everything from “compromising domestic and foreign policy with his massive conflicts-of-interest global business empire” to “telling hundreds of bald-faced lies” to “gross nepotism and appointment of unqualified persons to high office.”
That was why, Flynt wrote, he was seeking information from anyone who could provide a “smoking gun” — perhaps buried in Trump’s tax returns or in some other investment records — that would lead to his impeachment.
“Did he make some financial quid pro quo with the Russians?” the ad states. “Has the business of the United States been compromised to protect the business of the Trump empire? We need to flush everything out into the open.”
At the end of the ad, there is a toll-free number and an email address, along with a reassurance that Flynt fully intends to pay the full sum of $10 million for good information. 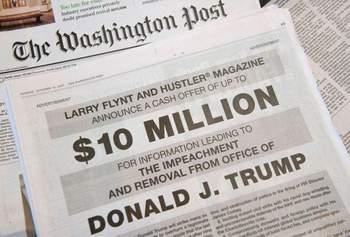