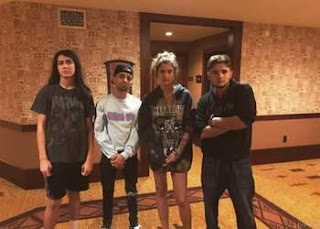 Daughter Paris Jackson, 19, posted a photo on Instagram of her along with brothers Prince Michael Jackson, 20 and Blanket, 15, who now goes by “Bigi,” along with longtime family friend Omer Bhatti.

Blanket/Bigi has mostly stayed out of the spotlight since, although in 2013 he appeared in a family-produced documentary where he remembered his father’s sometimes tumultuous life.

“It’s not right to invade someone’s privacy like that,” the youngster said of the intense media scrutiny that often followed Michael Jackson.

In November, Jackson family patriarch Joe Jackson tweeted a video message to his young grandson, urging him to “stay healthy.”

And in March Prince Michael, who has his own production company, talked to “Good Morning America” about his desire to continue his late father’s philanthropy.