Amateur explorers have discovered a network of 15,000-year-old caves underneath a Canadian city. The passageway, which is at least 200 metres long (660ft), was formed during the last ice age underneath what is now the city of Montreal.

The “once in a lifetime” October find by Luc Le Blanc and Daniel Caron was the result of years of trial and error. Connected to the Saint-Léonard Cavern, the cave network is six metres deep and parts must be traversed by boat.
For years, Mr Le Blanc and Mr Caron, both members of the Quebec Speleological Society, believed there must be another set of caves connected to Saint-Léonard Cavern near Parc Pie XII in the Saint-Léonard neighbourhood of Montreal, but they did not know exactly where.
So far, they’ve explored about 150 metres of the passageway, all while doing precise surveying for the city to make sure no homes above ground are affected by the cave.
They are waiting for winter, when the water table gets lower, to explore the rest of the caverns, which they think go on for at least another 50 metres. “We still have more exploring to do,” he said. “For us it’s a major discovery, the kind of discovery you make once in a lifetime.” 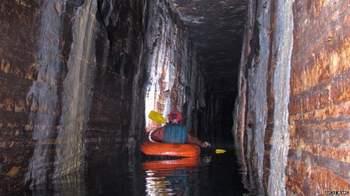