A family of woolly mammoths – including a one-year-old baby – is going on sale, offering museums the chance to exhibit a complete Ice Age family unit for the first time.
The ancient animal skeletons are expected to raise up to £400,000 at auction in West Sussex later today.
The prehistoric family of four, which were all found together by builders near Tomsk in Siberia 15 years ago, is made up of an adult male and female, a young female aged 8 or 9, and the infant mammoth.
The baby mammoth skeleton is particularly prized, with only one other known almost complete infant mammoth skeleton in the world.
The small size of the skeletons has led scientists to believe the animals lived in poor conditions, and died up to 16,000 years ago at the end of the Pleistocene period – a time when glaciers covered large parts of the earth.
Most mammoths died out around 10,000 years ago, with a tiny population enduring on isolated Wrangel Island – off the northern coast of eastern Siberia – until 1650 BC. 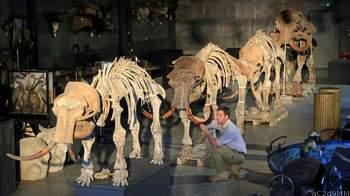