A Nigerian governor has created a new role for his sister – as commissioner for happiness and couples’ fulfilment.
Rochas Okorocha unveiled the post during the swearing in of 27 other new commissioners for Imo State.
It is not the first questionable decision the governor has made in recent times.
Earlier this year, he unveiled a statue dedicated to South African President Jacob Zuma – a man who has no apparent links to the south-eastern state.
It is not clear exactly what Mr Okorocha’s sister Ogechi Ololo will do now she has been sworn in.
She was previously her brother’s chief of staff, as well as being special advisor on domestic matters.
However, Mr Okorocha has warned she – and all his other commissioners – need to take their new roles seriously to help the regional authorities achieve their “vision”.
“We shall not tolerate any sharp practice or corruption of any type,” he told those gathered at Monday’s ceremony, according to Nigeria’s Daily Post newspaper. “Neither shall we accept indolence or laziness.” 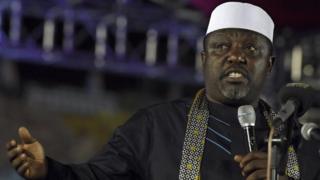