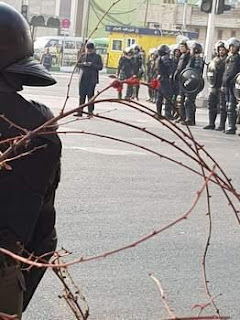 Iranians are free to protest against the government but must not jeopardise security, President Hassan Rouhani has said after four days of demonstrations.

Speaking at a cabinet session, he acknowledged that there were problems that needed to be solved but warned that violence would not be tolerated. The protests have been the biggest show of dissent since huge rallies in 2009.

There have been clashes in several cities, and Iran has restricted social networks used to organise protests. The “temporary” restrictions on the apps Telegram and Instagram were imposed to “maintain tranquillity”, state news agency Irib reports.

The protests began in the north-east as an outcry against economic hardship and rising prices, but turned political in many places, with slogans chanted against Supreme Leader Ayatollah Ali Khamenei, Mr Rouhani and Iran’s interventionist foreign policy in the region.

In his latest tweet on the issue, US President Donald Trump said that Iranians were “finally getting wise as to how their money and wealth is being stolen and squandered on terrorism”. In his first public comments, Mr Rouhani criticised Mr Trump.