ISIS has issued a new chilling threat to carry out a terror attack at the World Cup next summer with a sick poster of Lionel Messi crying blood.
The disturbing image shows the Barcelona star behind bars in the latest attempt by fanatics to spread fear ahead of the the tournament in Russia.
It comes after another chilling poster shows a terrorist armed with a gun and explosives near a football stadium in Russia along with the words: ‘I swear that the Mujahideen’s fire will burn you… just you wait’.
Another shows New York’s One Worldwide Plaza skyscraper along with a gunman, a meat cleaver covered in blood and the caption: ‘Soon. Just terror. So the penalty of your strikes will be paid in your lands.’
The message appears to be a reference to coalition bombing campaigns aimed at driving the jihadists out of Syria and Iraq.
According to SITE, which monitors terror activity, pro-ISIS group the Wafa’ Media Foundation, published the new World Cup warning in the wake of another recent threat. 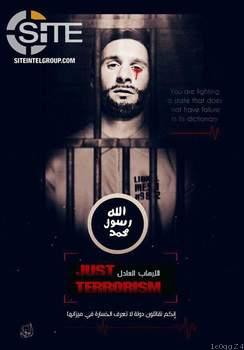