Israeli police will recommend that Prime Minister Benjamin Netanyahu be indicted in two corruption investigations, according to reports from local media.
Police officials were set to release their findings at 8:45 p.m. local time Tuesday (1:45 p.m. EST), but the Haaretz newspaper reported that they will recommend that prosecutors pursue the charges.
In the so-called “Case 1000,” Bibi is suspected of accepting gifts from billionaire benefactors — including cigars and champagne from the Israeli-born Hollywood producer Arnon Milchan — in return for advancing their interests.
Meanwhile, “Case 2000” involves a suspected illegal deal between Netanyahu and Yedioth Ahronoth newspaper publisher Arnon Mozes that would have provided him with positive coverage in exchange for hurting rival daily Israel Hayom.
Netanyahu has denied any wrongdoing, claiming on several occasions that “there will be nothing —because there is nothing,” the Haaretz newspaper reported.
Following the police announcement, Netanyahu is scheduled to make a live statement from his residence, the Times of Israel reported. 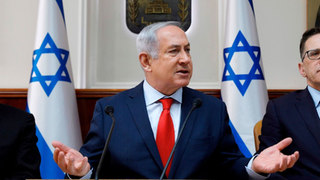