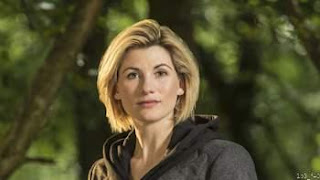 At the end of the one-hour special broadcast on Christmas Day, Scottish actor Capaldi “regenerated” into English actress Whittaker, who made history as the first woman to ever play the iconic time-traveling character.

Chibnall has already penned a number of episodes for Doctor Who, including stories for the Tenth and Eleventh Doctor, played by David Tennant (Jessica Jones) and Matt Smith (The Crown), respectively.

The actress made her Doctor Who debut at the end of an emotionally-charged episode where the Time Lord teamed up with a previous incarnation of himself, culminating in a scene during the famed Christmas armistice between opposing forces during WWI.

The next season is currently scheduled for Autumn 2018, and all eyes will, therefore, look to San Diego Comic-Con, where the team, fronted by Whittaker and Chibnall, will undoubtedly present the first trailer.

U.K. game show host/singer Bradley Walsh and actors Tosin Cole (who played a Resistance pilot in Star Wars: The Force Awakens), Mandip Gill (known for starring in the long-running Brit teen soap, Hollyoaks) and Sharon D Clarke (who debuted in the 1988 BBC mini-series The Singing Detective) complete the line-up for the new Doctor Who in 2018.