Unlike Jupiter, the activity on Earth’s northern and southern lights are pretty similar and approximately mirror each other. Not so on our neighboring gas giant.
The results published in Nature Astronomy on Monday reveal that the gas giant’s x-ray emissions are erratic at its north pole; the swirling patterns of light continuously brighten and dim over time. But at the south pole, the lights pulse steadily every eleven minutes.
William Dunn, lead author of the paper and a researcher at University College London and the Harvard-Smithsonian Center for Astrophysics, said: “We didn’t expect to see Jupiter’s X-ray hot spots pulsing independently as we thought their activity would be coordinated through the planet’s magnetic field.”
One theory that could explain why Jupiter’s northern and southern lights form independently is that its vibrating magnetic field lines produce waves that alter the speed and direction of the charged particles.
The trajectories for the particles travelling to the opposite ends are different, and enter the planet’s atmosphere at various times, where they smash into the ions there to produce light at distinct times. 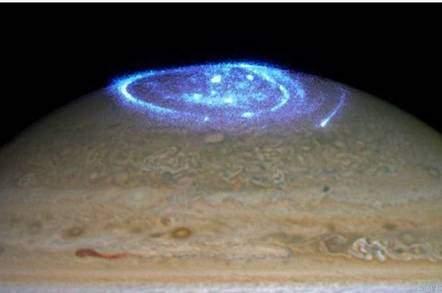