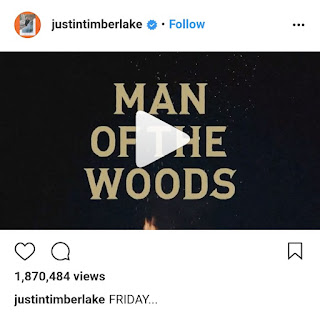 More than four years after the release of his last studio album, the Grammy-winning crooner surprised fans with a big announcement: new tunes are coming soon.

With an earthy visual to accompany his news, the Tennessee native unveiled his new aesthetic to fans as he teased his fifth solo record, Man of the Woods, due out in February, just in time for his Super Bowl 2018 halftime show.

“This album is really inspired by my son, my wife, my family, but more so than any other album I’ve ever written, where I’m from and it’s personal,” the star is heard saying as a montage of him outside in the snow, water and grass, holding his son Silas in front of a campfire and embracing his wife Jessica Biel plays out.

While fans have a month left to go before the album drops two days before the Super Bowl on Feb. 2, Timberlake also has the perfect way to ring in the new year a few days late-with a single.