NBA and Los Angeles Lakers great Kobe Bryant believes Tottenham star Harry Kane can reach the level of Cristiano Ronaldo and Lionel Messi following his two-goal haul against Liverpool.
The 24-year-old England international – who tops the charts with eight goals in his pursuit of a third consecutive Premier League Golden Boot – has scored 11 goals in eight matches for club and country.
Bryant, a spectator at Wembley alongside Diego Maradona, lauded Kane post-match as he compared him to Real Madrid’s Ronaldo and Barcelona star Messi – winners of the past nine Ballon d’Or awards.
“I like football and I enjoy watching it around Europe. I enjoyed the atmosphere at this game and seeing a top Tottenham team,” the five-time NBA champion, 2008 MVP and 18-time All-Star said.
“Kane is good, very good. I think he can still improve too because he is young and there are a lot of possibilities ahead for him.
“He can be like Ronaldo or Messi, if he believes in himself and continues working hard, then he can live up to that level. I love the way he fights and plays.” 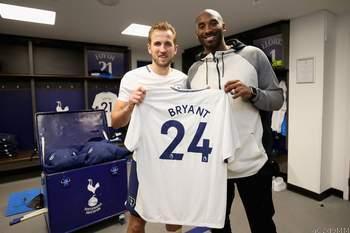