In light of recent events, Kwara is in a transition to become an entertainment hub. One of such entertaining events was the recently staged concert, at the instance of KFabbz Music Group (KMG) held at the Sound Bar Atlantic Club in Ilorin last Thursday, May 10th 2018 where fans and friends turned up èn massé to support and appreciate the very talented music act himself Fakorede Abass, popularly known with the stage name “KFabbz”.
Sequel to KFabbz’s performance which was ardently orchestrated by a live band, It was an evening of comedy, dance and some good music as several artistes took turns to entertain the audience.
During his performance which lasted for exactly 60 minutes, KFabbz was full of energy as he dexterously held the audience spellbound to his live musical performance, a feat adjudged first of its kind in the state of harmony.
The “like baba” crooner  is a sensational hip hop singer who stops at nothing to stand out in the music industry. Other hit music tracks to his credit includes “Demo”, “Street of Lagos”, “Freedom” “My time” amongst several others.
Expressing his joy at the successful and massive outcome of the concert, KMG’s Manager, Mr. Alabi Dharmi stated that fans and supporters should expect the music video of the hit track “Like Baba” and even more single featuring A-List artists and producer. He revealed that the whole concept of the concert was borne out of the passion and desire to be creative and exceptional in the fast growing music industry. In the same token, it was in a bid to bring people together for entertainment purposes while making them understand and enjoy the beautiful lyrics of KFabbz.
In his own words, KFabbz said “I am really happy about the show and I appreciate the love and support of my fans”. He furthered that the motivation behind the concert was that he had attended lots of musical concert in Lagos and so he feels he could pull one off in Kwara which he did I  conjunction with his team KMG and was happy about.
Spotted at the music concert were, Ambassador Abdulfatai Gambari, a lover and supporter of Kwara youths, Mr. Afolabi Qudus and Ologuntere Abdulazeem of Unfolding Trends, Queen Omolewa Akinseye (Miss Asa Kwara 2018), Opaleke Tosin (YMC) of Comedy Central and a host of others. 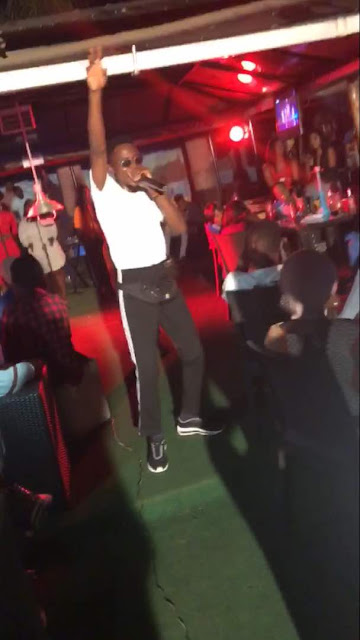