The Law Students’ Society (LSS), University of Ilorin, has recently held the second annual edition of her Personality Lecture entitled: “Prospect of the Legal Profession: Tapping the untapped Goldmines” in honour of Dr. Joshua Olukayode Olatoke SAN FCIArb.
The event which held at the Faculty of Law, featured the presentation of award to the honoree, Dr. Joshua Olukayode Olatoke SAN FCIArb and former Attorney General of the Federation Chief Akin Olujinmi CON SAN.
University’s Vice Chancellor, Prof. Suleiman Age Abdulkareem, was duly represented by Dr. Hakeem Ijaya, who lauded the LSS executive for their initiative and choice of the honoree as well commended the faculty for their assiduous effort and support to the success of the personality lecture. He added that the choice of the honouree was putting a square peg in a round hole.
In his remarks, the Dean of Law, Professor A.O Oba who was represented by Dr. Saka Olokooba said that the choice of the honoree by the Students’ executive was a good decision and the faculty felicitated with one of their own distinguished legal luminary.
The President of the Law Students’ Society, Mr. Ademu Desmond Francis, in his address, said that the personality lecture was an initiative conceived and implemented by his predecessor Mr. Olalekan Abdulrahman usually in honour of a member of staff who has achieved a remarkable feat from a fusion of law and academics.
He noted that the executive decided to main the status quo by organizing this second edition of the personality lecture in honour of an outstanding legal luminary. Ademu thanked the honouree and the guest lecture for honoring their invitation.
The guest lecturer, Chief Akin Olujinmi SAN, in his lecture said “Globalization has completely changed the face of the legal profession. Today professional intercourse across borders that was not there in the early days of the legal profession in Nigeria has become easy now.”
He continued, in the developed countries of the world, like United Kingdom, United States of America, Japan etc. the profession boasts large partnership practices.  He pointed out that apart from engaging as an advocate there are several other opportunities that are open to lawyers.
He added, that the civil service will continue to need you; the corporate bodies will continue to need you. As the business fortune of the country improves, it is definitely going to redound to an improved outlook for the legal profession.
The former Attorney General of the Federation noted that the good lawyer is always in demand and to be a good lawyer means you have to work hard. “The ultimate dream of every legal practitioner is to become a Senior Advocate of Nigeria. The belief is that once you become a Senior Advocate of Nigeria, you have hit instant fortune.”
He said. The learned silk added that no doubt, the title opens the field wide for a holder of the title and it may provide the key to that imaginary goldmine.  He further added that what makes a good lawyer and leads to imaginary goldmine is not the silk, wear as a Senior Advocate but hard work as it is  in every human endeavour hardwork is the key to success.
The honouree in response thanked the guest lecturer for honouring the invitation, all the Senior Advocates and others dignitaries present. He specially thanked the Students that he was humbled by the honour. In her vote of thanks, LSS Vice President Abubakar Maryam thanked the guest speaker Chief Akin Olujinmi, honoree Dr. Joshua Olukayode Olatoke, University and faculty management and others for honouring their invitation.
The event was graced by the former Attorney General of the Federation Chief Akin Olujinmi CON SAN, the honoree Dr. Joshua Olukayode Olatoke and the former President of the Court of Appeal Justice Isa-Ayo Salami (Rtd). Others include Chief Lateef Fagbemi SAN, Kehinde Eleja SAN, and Speaker of the Kwara State House of Assembly Dr. Ali Ahmad. Members of the Nigerian Bar Association (NBA) Ilorin branch, members of staff of the faculty of law as well as students.
UCJ UNILORIN. 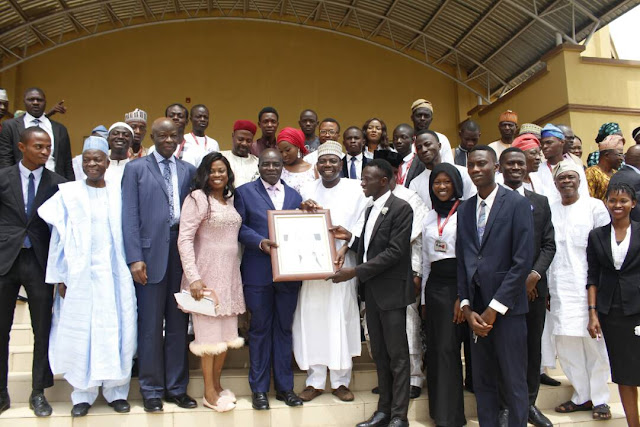