Barcelona has sealed their second title of the season against Deportivo La Coruna with a 4-2 win that saw Lionel Messi score a hat-trick.
Ernesto Valverde’s side are bidding to go through the league season unbeaten and went into the game 12 points clear of Atletico Madrid, and a further four clear of Real Madrid.
With the Copa del Rey already in the trophy cabinet, Barcelona have now clinched a domestic double.
The only disappointment is that the Catalans has failed to make a major impact on the Champions League this season.
UCJ, UNILORIN. 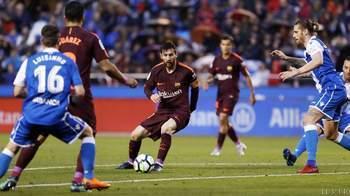