The Sonoma, California, resident was desperately searching for an escape route as wildfires that had ignited the night before raced through parts of Northern California and began to surround the area where he lived.
He’d been driving around all night, and was in the nearby town of Schellville, when he saw something that stopped him in his tracks — a tree full of fire.
McDermott said it was an unbelievable sight on what was an unbelievable day, as he crisscrossed the roads trying to find the best way out of the fiery madness.
“I’ve definitely not seen anything like this before,” McDermott, who’s lived in Sonoma for 10 years, told CNN. “We wanted to know the escape routes in case we needed them. The route to Poloma was open. I just stopped on the side of the road and the whole ridge is on fire.”
McDermott said while he was out checking the roads he bought masks — all the smoke from the fires has turned the air toxic in the Bay Area — and passed them out to whomever needed it. 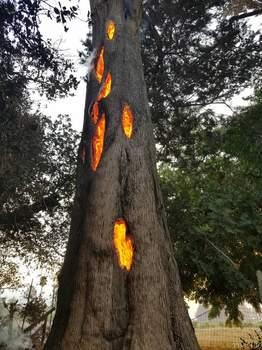