The department of Mass Communication Unilorin, hosted CEO, Image Merchant Promotion, Mr. Yushau Shuaib, a Public Relations icon from Abuja.
The Head of Department, Dr. (Mrs) S.S Abdulbaqi, referred to the session as an extension of the Students Veteran Interaction (SVI) held on Advertising and journalism.
Mr. Yushau in his speech, explained the concept of journalism, the social media and public relations.
According to him, “journalism deals with information, entertaining and education”. Education and enlightment should be the basis of Journalism, as one of its essential principles, he said.
Mr. Yushau enthused that, a journalist must be fair and objective in his writing, humane and not leave out sympathy in his work.”
He criticised the lackadaisical nature of some journalists in addressing sensitive societal issues and the importance of constructive criticism in mobilizing change in national issues; as in the case of the abducted Dapchi girls by the Boko Haram terrorists. 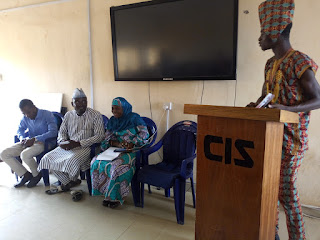 Mr. Yushau emphasised, “We are in a paradise of communication,” while referring to how the social media has provided a very easy and relaxing arena for interpersonal and mass communication. Although ridden with its own disadvantages, the social media is nevertheless, “a reliable platform for information, as regards the issues of the nation and can be used to avert crisis and propagate timely responses from the masses. This depending on the right social media source,” he said.
He declared that, “there’s power in the social media, as the keyboard is now mightier than the sword, and not the pen any longer.”
The media icon also cleared doubts and stereotypes about P.R personnels. “PR people are not propagandists. A professionally trained public relations expert is not a propagandist but one who mediates issues between two persons, especially those of societal recognition. They dwell on facts and not sentiments,” he explained.
According to him, public relations expert could also be a crisis communicator who uses lobbying as a tool for justice and not propaganda.
More so, he presented his book: “An Encounter With The Spymaster,” to the H. O. D of Mass Communication and the Association of Mass Communication Students, which was said will be made available in the departmental library for retrieval.
Tags: Unilorin Dailies