Skip to content
The department of Mass Communication, University of Ilorin, has held an interactive session with the CEO, Image Merchant Promotion, Mr. Yushau A. Shuaib.
According to the Head of the Department, Dr. (Mrs) S.S Abdulbaqi, the interactive session served as an extension of the Student Veteran Interaction (SVI) held on advertising with Mr. Bolaji Alausa, the Creative Director, Noah’s Ark Communication and other prominent journalist.
Mr Yushau in his lecture, explained three concepts, which include journalism, social media and public relations. According to him, understanding these concepts is key to attain success in Mass Communication.
He stated education, constructive criticism, among others as goals of journalism and truthfulness, accountability, humanity among others as principles of journalism. “Humanity is one principle that people tend to forget is part of journalism”, he said. 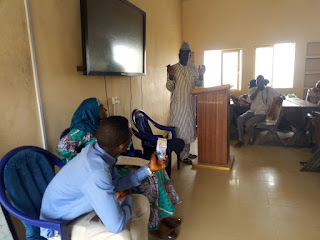 Mr Yushau opined that, the power of media lies in the social media. He identified sharing as the most important and most dangerous aspect of social media. “It is important, because that is how people get informed, and it is dangerous because a little mistake in what to share or who to share to can destroy a person’s life,” he added.
The public relations expert said, “Public Relations is about establishing and sustaining beneficial mutual relationship between an organization and the public”.
He added that, for one to be a good public relations officer, one must have the basic knowledge of journalism. The person also needs to be good in; spoken words, so as to represent the organisation well; written words, in order to write good publications for the organisation; and crisis management, in case the organization is faced with negative unexpected happenings, he said.
Yushau stated the difference between propaganda and public relations. According to him, “white propaganda” is a PR tool and is different from propaganda.
He further urged the students to continue to make the department and the university proud as he has seen their tremendous achievement in the just concluded YouthsDigest campus award.
Yunusa Habeebatullahi M.
Tags: National Dailies