First lady Melania Trump spent the early part of the morning on her second day in Japan being a dutiful dignitary spouse, accompanying President Donald Trump first on a stop to pay respects to the Emperor and Empress of Japan.
There, Trump — dressed in a demure, navy blue Christian Dior dress and not-so-demure ice blue snakeskin Manolo Blahnik pumps — sat in a low chair and chatted via an interpreter with Empress Michiko, while their husbands, huddled just feet away, separated only by a flowering plant, did the same.
Melania Trump was characteristically stoic for most of the action, walking through the motions until, finally, it was time to split off from her husband and join first lady Akie Abe for their solo afternoon adventures.
At the sight of the 200 or so uniformed students assembled to greet her in the school’s gymnasium, Trump’s face lit up — she high-fived them, was drowned in hugs and posed for a group photo, where, like the kids, she made a peace sign with her two fingers.
A Japanese calligraphy lesson was next; the fourth-grade classroom erupted in applause as the two first ladies entered, mindfully watching the children draw brush strokes.
By mid-afternoon the first lady was back to a supporting role, seated front row to witness the President’s anticipated joint news conference with Abe — policy and politics pushing peace signs and calligraphy lessons quickly out of the limelight.
UCJ, UNILORIN. 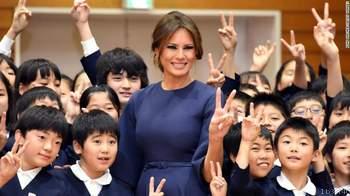