Lionel Messi reached yet another milestone in his storied career as he made his 600th Barcelona appearance against Sevilla on Saturday.
The Argentine made his Blaugrana debut under Frank Rijkaard back in October 2004, and has since gone on to be considered one of the greatest players ever.
With 30 major titles to his name and a glut of individual honours, Messi’s place as an all-time great is fully merited, and with Barca top of La Liga by one point over Valencia more honours may follow by the end of the current season.
Of Messi’s 600 appearances, 393 have come in the league, 119 in the Champions League, 62 in the Copa del Rey, 17 in the Supercopa de Espana and five and four respectively in the Club World Cup and UEFA Super Cup.
A remarkable 425 have ended in victory, giving the Argentina international a 71 per cent winning record. 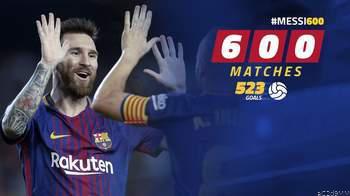