The head of the UN food agency has appealed for aid to avert a humanitarian crisis in the conflict-wracked DR Congo province of Kasai.
David Beasley told the BBC that more than three million people were now at risk of starvation.
He warned that hundreds of thousands of children could die in the coming months if aid was not delivered.
Violence flared in August 2016 after the death of a local leader during clashes with security forces. It has forced 1.5 million people from their homes, most of them being children.
Mr Beasley described the situation in Kasai as a “disaster”. “Our teams are out in the field, we saw burned huts, burned homes, seriously malnourished children that had been stunted, obviously many children have died already,” the head of the World Food Programme (WFP) said.
“We’re talking about several hundred thousand children there that will die in the next few months if we don’t get first funds and then second food, and then third access in the right locations,” he added. 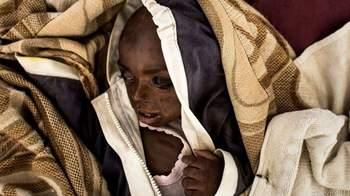