The Manchester United manager said his goalkeeper has no equal after his record-tying display against the Gunners.
Jose Mourinho hailed David de Gea as the best goalkeeper in the world after the Spaniard’s inspired display helped Manchester United clinch a 3-1 win at Arsenal.
Jesse Lingard scored twice after Antonio Valencia’s early opener as second-placed United recorded back-to-back away wins in the Premier League for the first time this season.
However, the visitors needed De Gea to repel an Arsenal onslaught either side of half-time, with United’s last line of defense making a number of eye-catching saves en route to a record-tying evening. 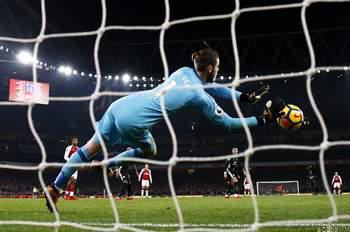