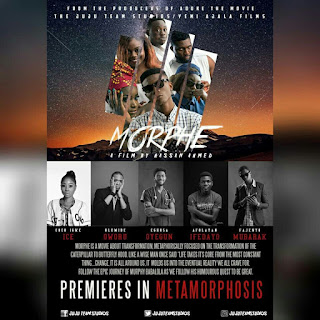 Synopsis: After the trailer teaser has been released with the clause: The Caterpillar is about to change forever, the trailer drops with an unnamed guy running to meet some guys already waiting for him like they were on a kill command. Some ladies on a straight line like an induction orientation ground. Another scene of an uproar that made Olumide Oworu dumb of what to do, and ending with two imbeciles miming the tune of the background music. Then: The cocoon seems desolate, and its glory is the emerging butterfly. Welcome to Morphe, the movie.

Trailer Review: Hassan Ahmed showcases another adrenaline-filled, comical trailer to the world. New actors with few known ones but with a totally distinct script put to play. The trailer moved the audience with its scenic transitions.

The youth-filled movie reveals crisis as a part of this generation, which only a counter hegemony operations can pave way for survival. As Mubarak swipes scenes from laughing in a restaurant to receiving strokes of cane in school and cool Olumide Oworu been almost torn apart in a center attack, there seems to be no escape route from violence.

The teaser has wet the ground, hence the trailer was very much anticipated and it also created more hunger for the full movie with the excellence put to play in the direction of photography and the actors and actresses expertise. The trailer served as a great suspense-filled entertainment with its colorful scenes and plot twists. Hassan used actors in a unique way to create actions of blockbuster hit movies like the mechanic resurrection. Every actor seems like a star.

The background music flows with the trailer’s pace. After a few scenes however, it is convincing that the casting was a good one. There was few times when the trailer seems a bit drawn out, but the gorgeous action scenes stimulate the audience attention and kept them on the edge of their seats. Being a unique trailer, as I would call it, one can’t really give head light to the story itself; a success on the path of the creator, even though some people might desire a lead into the story.
Despite the trailer’s minor shortcomings, it’s exciting, creative and worth few seconds of your time. Anticipate the full movie, premieres at metamorphosis. 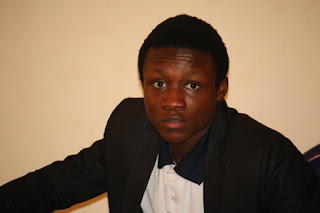 Adesina Opeyemi is a writer, advertising enthusiast, and a creative student of Mass communication, University of Ilorin. His zeal is to bring up innovation with the combination of creativity and knowledge of media studies. He is a member of Writer Space Africa, also partook in the future creative leaders award by Chini Productions, A silver winner in Apcon’s Advertising Creativity and Innovation Talent hunt. His love of Nigerian youth’s creativity prompted him to review Hassan Ahmed’s Movie- Morphe.