Zimbabwe’s parliament was due to begin impeachment proceedings against President Robert Mugabe on Tuesday, the first time in the country’s 37-year history that it has attempted such a move.
A joint sitting of the Senate and National Assembly was scheduled to begin later. The ruling party, ZANU-PF, plans to table a motion that will begin the process of formally removing Mugabe, who has been clinging on to the presidency despite a military takeover last week. ZANU-PF, which Mugabe co-founded and led for decades, ousted the 93-year-old leader as their party chief on Sunday and gave him an ultimatum to step down in 24 hours or face impeachment.
The former vice president, Emmerson Mnangagwa, has joined those calling for Mugabe to stand down, in his first comments since the President fired him on November 6, triggering the political firestorm. 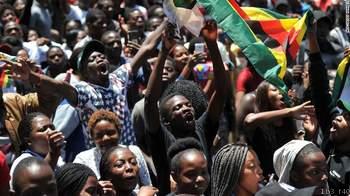