Leaders from the 57-member Organisation of Islamic Cooperation recognized East Jerusalem as the occupied capital of a Palestinian state and called on the international community to do the same, according to the final communique from the group’s emergency summit on Wednesday.
The group of mostly Muslim leaders had called an extraordinary meeting in Istanbul to discuss US President Donald Trump’s controversial recognition of Jerusalem as Israel’s capital last week.
Turkish President Recep Tayyip Erdogan declared that a “new alliance” had been formed in opposition to Trump’s Jerusalem declaration, which he described as “not valid in our understanding, in our mentality and in our conscience.”
Erdogan said the US “can no longer act impartially” as a mediator between the Israelis and Palestinians, and that other countries needed to be identified to replace the US in that role.
“It is better for the Palestinians to recognize reality and work toward peace and not to work toward radicalization, and to recognize an additional fact about Jerusalem: not only that it is the capital of Israel, we also protect in Jeruaslem freedom of worship for all of the religions.” 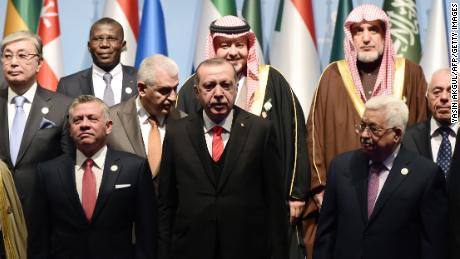