UCJ: can we meet you?
I-zubair: I’m Zubair Ibrahim (i-zubair), the immediate past Sport Secretary, Student Union, University of Ilorin.
UCJ: The last time we spoke with you on phone, you said you heard about the souvenir saga, right? Can you tell me what you know about it?
I-ZUBAIR: I don’t really know much
UCJ: Can you tell us the little you know?
I-ZUBAIR: All I know was that the Union awarded the souvenir project to a contractor (Arroshyd Press) and what was approved by the senate council was delivered by the contractor according to the welfare secretary at a meeting we had regarding the issue.
UCJ: Are you saying the former Welfare Secretary came to the meeting and tell the council the souvenir was  complete when he counted it?
I-ZUBAIR: I’m saying what it is ma. The Welfare Secretary confirmed to all CEC members that the approved copies have been delivered and stored.
UCJ: Where do you think the discordance in the souvenir matter lies?
I-ZUBAIR: Honestly, I can’t really pinpoint here because; though we work as a team, but I was the Sport Secretary of the Union. Ask me anything about sports as at the period of my stay in office, I’d tell you… Ask me about every other office; I’d tell you little.
UCJ: But sir, you are one of the members of CEC, how come you didn’t know much about the souvenir contract?
I-ZUBAIR: My responsibilities as a Union executive member were focused on sporting activities which occupied most of my time with several events, therefore every information that I was aware about were as result of general meetings held for the CEC members.
UCJ: Was there any clash between Eminent and the former Welfare Secretary?
I-ZUBAIR: As at the time we left office, none was officially made known to any of us (or let me say me)… Except there’s a spiritual war/battle between the duo.
UCJ: Did you play any role in the contract deal?
I-ZUBAIR: I didn’t play any role, although I was informed when the souvenir was contracted and delivered.
UCJ: Was the souvenir distributed during your tenure?
I-ZUBAIR: No, it was not.
UCJ: The former Welfare Secretary alleged Eminent as not being a saint. What can you say about this?
I-ZUBAIR: The statement is semantic. People see things from different perspectives, what appear as 9 to you might be 6 to me.
UCJ: He also said Eminent asked him not to count the souvenir, what do you have to say about this, sir?
I-ZUBAIR: I was never aware of this statement until I went through the interview which UCJ had with the former Welfare Secretary.
UCJ: What do you have to say to unilorites over the allegations made against Mr Shobowale Lukman?
I-ZUBAIR: I besiege Unilorites to be patient till the root of this matter is gotten to(sic).
UCJ: Thank you very much, for the time spent so far, Sir.
I-ZUBAIR: You are welcome ma/sir. 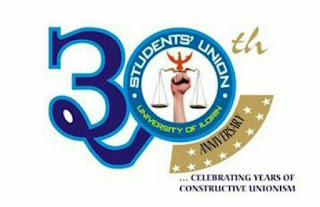