A small asteroid or comet that has been spotted racing through our solar system may have come from elsewhere in the galaxy, US space scientists say, possibly marking the first such interstellar visitor observed from Earth.
The mystery object, so far known only as A/2017 U1, was discovered earlier this month by a researcher using a sophisticated telescope system at the University of Hawaii that continually scans the universe for such phenomenon.
“We have been waiting for this day for decades,” said Paul Chodas, manager of the National Aeronautics and Space Administration’s Center for Near Earth Object Studies at the Jet Propulsion Laboratory in Pasadena, California.
“It’s long been theorized that such objects exist — asteroids or comets moving around between the stars and occasionally passing through our solar system — but this is the first such detection,” Chodas said.
The mass, a quarter mile (400 meters) in diameter, quickly stood out for scientists because of its extreme orbit, coming from the direction of the constellation Lyra, almost directly above the elliptical plane where the planets and other asteroids orbit the sun. It crossed under that plane just outside Mercury’s orbit on Sept. 2 before being slung by the sun’s massive gravity into a sharp turn under our solar system. The closest the object came to Earth was about 15 million miles away on Oct. 14.
“It is going extremely fast and on such a trajectory that we can say with confidence that this object is on its way out of the solar system and not coming back,” NASA’s Davide Farnocchia said. 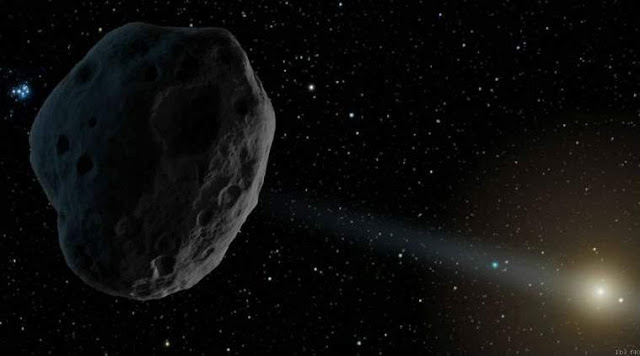