Acting Chairman of the Economic and Financial Crimes Commission, Ibrahim Magu, on Thursday said the young man who blew the whistle on the monies found in an apartment in Ikoyi area of Lagos State is already a millionaire.
Magu said this in his address at the ongoing 7th Session of the Conference of States Parties to the United Nations Convention Against Corruption in Vienna, Austria.
According to him, the young man has become a millionaire by virtue of the percentage he is officially entitled to, after EFCC operatives recovered $43,449,947, £27,800 and N23,218,000 from an apartment located at 16, Osborne Road, Ikoyi in April.
“We are currently working on the young man because this is just a man who has not seen one million naira of his own before,” the EFCC boss said. “So, he is under counselling on how to make good use of the money and also the security implication. We don’t want anything bad to happen to him after taking delivery of his entitlement. He is national pride.” 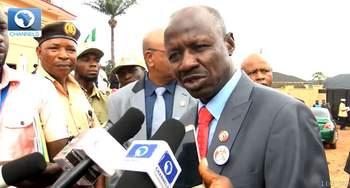