Argentina’s navy on Monday picked up sounds that could be a distress signal from the crew of a missing submarine and said the captain reported a “failure” in the vessel’s battery system before it disappeared.
Two vessels searching for the submarine heard a “noise” at a depth of about 656 feet, said navy spokesman Enrique Balbi from Buenos Aires.
The sonar systems of the two ships detected noises sounding like tools being banged against the hull of a submarine, according to a senior US Navy official familiar with the Navy’s assistance in the search for the Argentine vessel.
The Argentine navy was able to fix the rough location of the sounds the two ships picked up and is now concentrating its search in an area of 35 square nautical miles, approximately 330 miles off the coast, the official said.
Under normal circumstances, the vessel has sufficient fuel, water, oil and oxygen to operate for 90 days without external help, Balbi said, and the vessel could “snorkel” — or raise a tube to the surface — “to charge batteries and draw fresh air for the crew.” 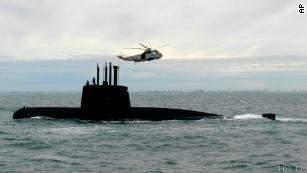