A Dutch radio presenter has apologised to a young pop star after ambushing her with a naked man while she was singing live on air.

DJ Frank Dane pulled the prank on Maan de Steenwinkel when she was performing on Radio 538. The singer burst into tears, while the presenter and others in the studio laughed.

Maan, 20, said the streaker left her “really scared” and it was a “really stupid prank”. Other artists called for a boycott of the station, calling the stunt disrespectful. The incident happened last month but stoked fresh anger online over the weekend, with some on social media calling it sexual harassment.

Singer Tim Knol said it was “not funny in any way” and urged other musicians not to promote their music on the station. In an Instagram post on Monday (in Dutch), Maan said the prank “made me feel really awful” at the time but she had accepted the DJ’s apology.

According to Dutch media, Dane said he was sorry, that he did not intend to upset her, and he hoped they could remain friends. 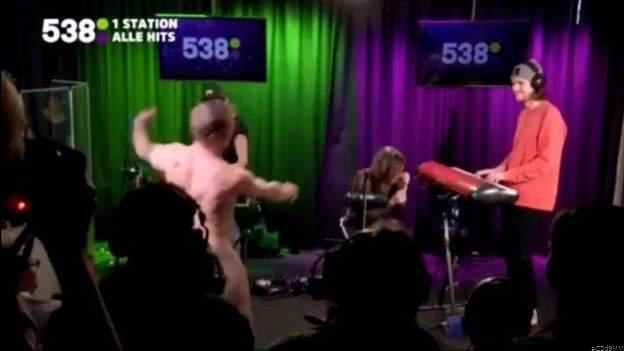