You may want to get used to the name Ross 128 b. The newly discovered exoplanet is the second-closest found to our solar system, only 11 light-years away. And it could support life.
Announcements about exoplanets, those found outside our solar system, seem almost commonplace in this golden age of discovery for astronomers.
The planet is about the same size as Earth, and it may have a similar surface temperature, making it a temperate world that could support life.
Every 9.9 days, it completes an orbit around its host star, Ross 128, which is what’s known as a red dwarf star: They’re the coolest, faintest and most common stars found in the universe.
Because of their plentiful nature and the fact that other exoplanets have been found around these types of stars, red dwarfs are being studied and observed with increasing frequency in the hopes of finding more exoplanets.
Astronomers found Ross 128 and its planet using the European Southern Observatory’s planet-hunting instrument, called HARPS. The High Accuracy Radial velocity Planet Searcher is based at La Silla Observatory in Chile.
The astronomers detail their discovery in a new study, published Wednesday in the journal Astronomy and Astrophysics.
“To be involved in such a discovery is very rewarding, and it helps to realize that so much effort is worth it,” Nicola Astudillo-Defru, one of the study’s co-authors at the University of Geneva’s observatory, wrote in an email. “The special properties of this system means that we are contributing our bit on the search of an Earth 2.0.” 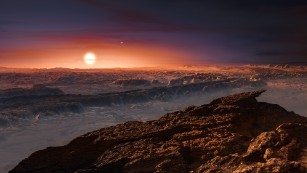