Neymar paid a surprise visit to his old Barcelona team-mates at a training session on Sunday.
The Brazil international turned up at a session at the Ciutat Esportiva as his old club began their preparations for their Champions League trip to Olympiacos.
Barca even posted a picture of the 25-year-old on their official Twitter account, with the simple caption: “Neymar visits his ex-team-mates.”
Neymar, who is locked in ongoing legal disputes with Barca regarding allegations of a breach of contract and the club’s refusal to pay him a loyalty bonus, was pictured chatting with Barca first-team players including Luis Suarez and Lionel Messi.
The former Santos man was banned for PSG’s 3-0 Ligue 1 win over Nice on Friday but is expected to return for the midweek clash with Anderlecht. 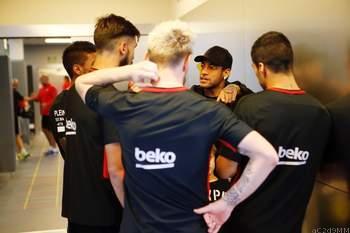