First, there was “little rocket man.” Now, Kim Jong Un returned fire in the nickname game with “mad dog Trump.”
Pro-North Korean propaganda posters likening the U.S. president to a raging dog have begun popping up across the South Korean capital, Reuters reported Monday, citing social media posts and people that found them.
Let’s behead mad dog Trump for the future of a peaceful and warless world and mankind!” one bizarre poster pleads, showing the body of a dog with Trump’s head, being decapitated by an axe.
“Death to old lunatic Trump!” read another, which showed a North Korean soldier stomping on a head that appears to be Trump’s. 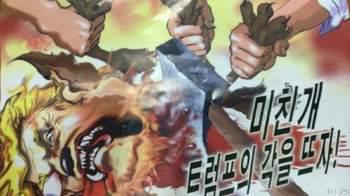