Onstage at Oculus Connect 4 in San Jose, Facebook CEO Mark Zuckerberg unveiled a new mobile headset called “Oculus Go.”
According to Zuck, “it’s the most accessible VR headset yet;” it starts at $199 and it’s going to ship early next year.
It appears that the mobile headset will be a similar experience to the Gear VR, allowing users to spin around but not move freely.
Facebook VP of VR Hugo Barra called the device, “hands-down the easiest way for developers to get involved with VR.” He said it’s lightweight and “feels incredibly soft to wear.” It will sport lenses that have the same wide field-of-view as Rift and will have a small controller similar to the one that ships with the Gear VR.
The device utilizes a “fast-switch” WQHD LCD screen and spatial audio. It will be cross-compatible with all Gear VR titles. We don’t have much else in the way of specs or battery life right now. Dev kits will ship in November.
UCJ, UNILORIN. 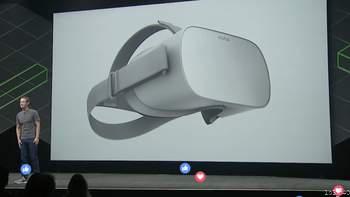