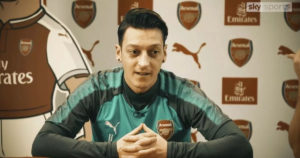 Mesut Ozil has said Cristiano Ronaldo is better than Lionel Messi but his reason seems not to be convincing.

The Arsenal star was joined by fellow Gunner Shkodran Mustafi during a mock press conference set up by Sky Sports and he was asked to choose between the two players.

The German spent four seasons at Real Madrid playing with Ronaldo, winning a La Liga title and one Copa del Rey and it’s no surprise to see the 29-year-old back his former team-mate.

“I think I will go for Messi,” responded Mustafi.

“I will go for Ronaldo because I played with him,” answered Ozil.

When he sees the reaction of the kids, who were clearly expecting the midfielder to say Messi, Ozil makes a funny sound and waves his arms in comical fashion.