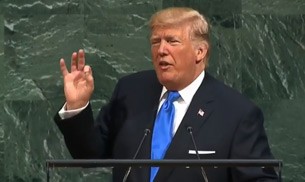 US President Donald Trump thought he should give people a hint of what they should expect this year. And some entertainment.

Donald Trump, in a tweet, slammed previous US governments for supporting Pakistan monetarily and then came down heavily on Pakistan saying the country gave America nothing but lies and deceit.

Trump claims that the United States of America ‘foolishly’ gave more than 33 billion dollars to Pakistan in aid and said that in return, Pakistan considered American leaders fools.

He said, “The United States has foolishly given Pakistan more than 33 billion dollars in aid over the last 15 years, and they have given us nothing but lies & deceit, thinking of our leaders as fools. They give safe haven to the terrorists we hunt in Afghanistan, with little help. No more!”

The United States has provided Pakistan more than $33 billion in aid since 2002. But the annual funding has declined in recent years as Washington became increasingly disenchanted with Pakistan’s quiet support for the Haqqani network and the Taliban, whose attacks have been responsible for the deaths of American troops in Afghanistan.