Newly elected PDP Chairman, Uche Secondus, the Chairman of the Peoples Democratic Party Board of Trustees (BoT), Senator Walid Jibrin, yesterday said that the party is already working to present the best presidential candidate from the North in 2019.
Mr. Jibrin stated this as he received members of the PDP Ward2Ward Group who visited him in Abuja.
PDP, the main opposition party, wants a formidable, dogged and credible candidate who can challenge the ruling All Progressives Congress (APC) in 2019.
“All of us as a party have agreed that the President of Nigeria should come from the North in 2019. I enjoin you to support the North to bring and give us capable presidential candidate,” he said.
“We are all doing what we can in the North with all the leaders to identify who is the best candidate to rule this country.
“The best person that will take power from the ruling party in 2019 is our own, 2019 is for the PDP,” Senator Walid Jibrin.
The PDP BoT Chairman who said that the return of former Vice President Atiku Abubakar is a good omen also called on Senator Rabiu Musa Kwankwaso, a former Governor of Kano State, Senate President Bukola Saraki, and others who left the party for APC to return.
Former Vice President Atiku Abubakar announcing his defection to PDP
“The return of Atiku to this party, whether we like it or not, is a good omen. By boldly coming back to his home, it is a good omen.”
“We are, therefore, calling on the Senate President, Bukola Saraki, Kwankwaso and all our former legislators who left this party to come back quickly. When they come back, then we shall together take a look at the issue of leadership. The issue of who wants to become the President of Nigeria will now depend on all of us; we all will decide who will be the President of Nigeria,” Senator Jibrin said.
UCJ, UNILORIN. 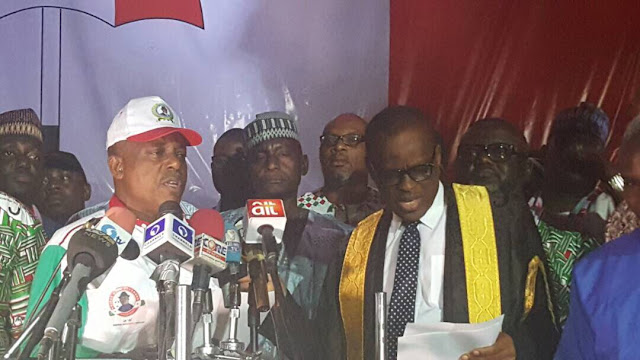