The 200level mass communication students of the University of Ilorin, held the second edition of their annual photography exhibition at the school auditorium basement.

The photography exhibition, tagged FotoClique2018, is a collaborative practical works of the 200level students of photojournalism and 300level public relation students of the department of mass communication. Both courses are tutored by the same lecturer, Dr Kadiri Kehinde Kadijat, the convener of the exhibition.

The 2018 exhibition, themed; THE CONVERGENCE, saw the presence of eminent personalities like the Vice Chancellor, represented by the Deputy Vice Chancellor R.T.I, Professor Gabrel Olatunji; the Dean of the Faculty of Communication and Information Sciences, represented by the Sub Dean, the Head of the Department of Mass Communication, Dr Saudat S Abdulbaqi and the three evaluators who are coincidentally from the three major tribes in Nigeria. 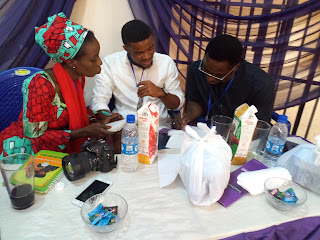 Professor Olatunji, who had also represented the vice chancellor at the fotoclique’17, reveals that he had been fascinated by the fotoclique’17 and even if the VC had not asked to be represented, he would have been at the exhibition on his own accord. He appreciated the convener, Dr Kadiri and assured her that the University will definitely put more into Fotoclique and make it bigger in future.

The first evaluator, Obidinma Nnebe, a street photographer, spoke extensively on the challenges and prospect of photojournalism. He admonished the need to be passionate about photography before delving fully into it, as there are various challenges that would require a lot of perseverance on the part of the photographer. Nnebe, who had quitted a year into his office job to focus on his photography career, encouraged the evaluators to disregard people’s opinion of photography and it will eventually pay off.

In his words, “…don’t be discouraged about people’s opinion of photography. Many people think it is useless but the feeling of people paying for and appreciating your work is fulfilling. I’ve had two exhibitions so far and I’ve had people pay for my photos. It’s a good feeling.” 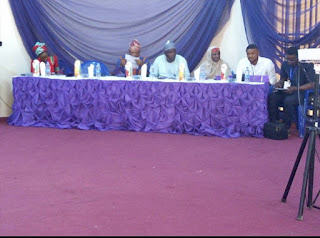 Ayodeji Ogunro, the second evaluator, a documentary photographer spoke on the essence of research in photography. Using some of the pictures of moments he captured at a Fulani settlement and an IDP camp, Ogunro described how a picture can tell a deep story about the lives and challenges of some people. He explained that research is very essential in documentary photography as it helps the photographer to understand his subject and to know the best ways to approach them.

“You know what to do to take pictures and to be great, all you need to do is to start now,” he said.

The last evaluator, Fati Abubakar, a documentary photographer from Borno state, described the WHYs and HOWs of photography. According to her, she ventured into photography to reshape how people around the world view Africa and especially her state, Borno that has suffered numerous attacks courtesy of the Boko Haram insurgency.

She encouraged the exhibitors to take advantage of their presence in Africa, capture beautiful moments that will lighten up the dark picture people abroad have registered in their minds. Fati Abubakar described the role of a photojournalist as a very sensitive one where the lives of people will be captured and shown to the world.

“Your role as a photojournalist is to first engage with the society you’ll be capturing. Know your object first, their concerns and how they feel about you capturing them. Photojournalism should be 70% talking and 30% capturing…tell the story of the GOOD, the BAD and the UGLY. Balance up your story, as much as you’re wowed about your environment, the bad aspect counts too” she said. 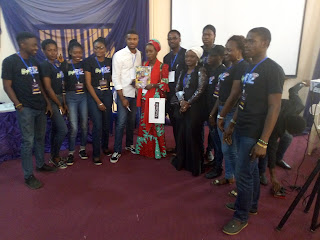 At the exhibition proper, the evaluators assessed the pictures displayed for exhibition at both amateur and professional levels; top three pictures were picked at each level and certificates of excellence were presented to the winners.

Right before the end of the event, the second edition of the photo magazine, APERTURE, a publication of the 200level mass communication  students, was unveiled by Dr Kadiri KK and a brief review of the magazine was done by the Editor in Chief, Fatimah Shehu and the Chief Planner, Adeshina Opeyemi.