A shocking image of environmental crime has been declared the top entry in this year’s Wildlife Photographer of the Year (WPY) competition.
Stirton, who collected his award at a gala dinner at London’s Natural History Museum, believes this particular piece of butchery was probably carried out by local people, but working to order.
Brent Stirton told BBC News: “For me to win this, for the jury to acknowledge this kind of picture – it’s illustrative that we are living in a different time now, that this is a real issue.”
Lewis Blackwell, the chair of judges for WPY, said the rhino image had had a searing impact on his panel: “People may be disgusted, they may be horrified – but it draws you in and you want to know more, you want to know the story behind it. 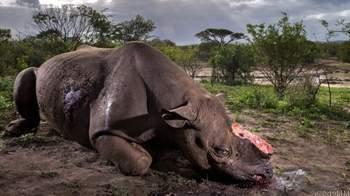