The Nigerian Police Force Public Complaint Rapid Response Unit has opened channels through which the public can report complaints about the Special Anti-Robbery Squad, popularly known as SARS.
On the poster which has graphics depicting men on SARS uniform along with SARS squad vehicle, also carries the slogan, “Bail Is Free”. Late in October 2017, a 2015 graduate of Kwara State Polytechnic, Ekwere Imoh, was shot by policemen attached to SARS, Oyo State Police Command.
Earlier in the same month, a lady, Kachi Anifela Zion, accused officers of SARS in Ilorin of sexual molestation. She said a male SARS official under the pretence of searching her, dipped his hand in her underwear.
She further revealed that the SARS official threatened to beat her if she shouted, adding that the officer continued to fondle, rough handle and humiliate her for several minutes. The SARS official implicated in the matter was later arrested.
You don’t need to know their names, all we need you to provide are details of the occurrence (action/act) with DATE, TIME & PLACE.
The channels listed on the poster are, 08057000001 and 08057000001 for calls; 08057000003 for SMS and WhatsApp messages; 2BA2B5DE for BlackBerry messages; PoliceNG_PCRRU for Twitter and www.facebook.com/PolicePCRRU for Facebook messages. 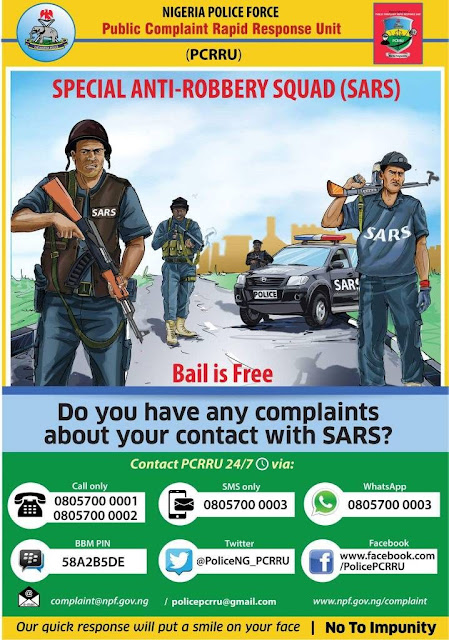