Highway robberies may have taken a turn for the worse after a police sergeant, Williams Godwin, was allegedly involved in the robbery of a commuter identified only as Henry.
PUNCH Metro_ learnt that the 41-year-old victim was on his way to work when he joined a cab along the Lagos-Ibadan Expressway en route to Lagos Island.
He was said to have been attacked at gunpoint, as the assailants, which included Godwin, allegedly dispossessed him of his ATM card and N4,000. However, during the incident, the policeman’s ID card allegedly fell into the luggage of the victim, who was rushed to the Lagos State Accident and Emergency Centre at Toll gate, Ojota, where he was admitted and treated.
One of those who rescued Henry told _PUNCH Metro _that he was stabbed with a sharp object in the back. 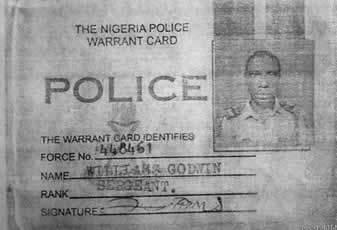